Diabetes and cardiovascular diseases- both preventable conditions, have now become the leading causes of mortality and morbidity globally and more so among the South Asian communities. IHO started a health screening program in 2010 for these conditions among the South Asian communities both in US as well as in India and Nepal. This screening program has helped find many previously undiagnosed cases of hypertension and diabetes and thus intervene in time. Likewise, thousands of people have been screened and counseled on how to prevent these deadly diseases. Also, IHO has been tracking the refugee and migrant communities from Indian Sub-continent who have migrated to US to track the changes in their life-styles and thus how to prevent these life-style influenced diseases. IHO’s goal is to screen ONE MILLION people in the Indian Sub-continent to prevent diabetes and cardiovascular diseases among them. 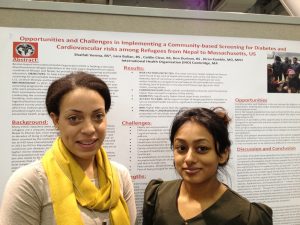 The first Grand Rounds took place at the Dr. SN Medical College in Jodhpur, Rajasthan on
June 30, 2007. The event was attended by about 35 residents, fellows and faculty from the medical college and community. Dr. PK Gupta, Principal and Chief of Chest and TB at Dr. SN Medical College, inaugurated the first Grand Round series at Dr. SN Medical College, Jodhpur in partnership with the Global Foundation for Humanity, Health and Public Welfare Society and the Vietnam-CDC-Harvard AIDS Partnership of Harvard University. Dr. Donn Colby of the Vietnam-CDC-Harvard Medical School AIDS Partnership (VCHAP) presented an update on HIV/AIDS prevention and treatment.

Dr. Colby also attended clinical rounds in the HIV outpatient clinical and medical inpatient unit with senior and resident physicians from the medical college. Jodhpur is the site of one of two HIV clinics in the state of Rajasthan that provides free ARV medications through the Indian National Treatment program.

AIDS in India: Progress and Opportunities

We were honored to have the following guests in attendance:

Click here to see more pictures from the event

The foundation for the IHO Health Center in Gujarat, India (Picture on Right) was laid in the aftermath of the massive earthquake is now complete and functioning successfully for the last several years.  Shown is the partially completed health center with some of the field staff and health educators that have been working since the laying down of the foundation! This an exciting time for the people of Gujarat who now have their own health center in Bhuj.

The new health center is used to:

IHO IN THE NEWS – RECENT ARTICLES:

Patna Doctor Goes All the Way to Help AIDS Victims

Published in the Patna Daily

Published in the Patna Daily

Four men earlier diagnosed with AIDS honored Dr. Diwakar Tejaswi who is the Medical Director of RATNEI, IHO. The doctor who helped them defy death shared cake with the former HIV-infected men.

Published in the India New England

BOSTON— The chairman of the International Health Organization’s recent conference, “AIDS in India: Progress and Opportunities,” said he wanted the event to be more than just talk about the subcontinent’s epidemic.

A Tale of Two Citizens

Published in the Valley Advocate

Back in the late ’90s, as the city of Springfield’s first “liaison to the gay community,” Joe D’Amour scored some impressive victories. He persuaded then-Mayor Mike Albano to extend health insurance and other benefits to the partners of city employees, and he got off the ground programs for gay students in city schools.

Published in the India New England

India’s chances of landing a permanent seat on the United Nations Security Council are remote, former U.S. Ambassador to India Frank Wisner said at a recent fund-raiser for the International Health Organization.

Pramila who is a public Health Professional and works at the Harvard Medical International, Harvard Medical School tells me that IHO is celebrating its tenth anniversary. [read full article]

Galbraith, 95, shares stories from his time as ambassador
Published in the India New England
Monday, December 15, 2003
By Mark Pickering

Article Summary:
CAMBRIDGE, Mass. – The audience was all ears as 20th-century icon John Kenneth Galbraith, former U.S. ambassador to India, got ready to speak. When the ailing economist said it was the first time he had been out of his house in six months, attention became even more rapt.

For information on HIV/AIDS in the Asia Pacific Region, visit youandaids.org.